Through the Museum's Online Resources, you can enjoy our highlighted exhibits, engage in various science programmes online, and explore the wonders of science anywhere and anytime! 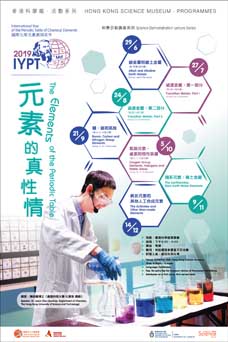 The Periodic Table of Chemical Elements is one of the most significant achievements in science, capturing the essence not only of chemistry, but also of physics and biology. The year 2019 marks the 150th anniversary of its creation by Russian scientist Dmitry Ivanovich Mendeleev. The Year was proclaimed by the United Nations General Assembly as "International Year of the Periodic Table of Chemical Elements 2019" (IYPT2019). To support IYPT2019, Hong Kong Science Museum has invited Prof. Jason Chan, Assistant Professor of Science Education from the Department of Chemistry at The Hong Kong University of Science and Technology, to perform a series of extraordinary science demonstration, namely "The Elements of the Periodic Table". In the demonstration, he will showcase spectacular experiments and unique element samples, by which you will be taken into the world of the elements to explore their individual properties and listen to their fascinating stories.

The Group 1 and Group 2 metals are the most reactive metals. These metals can be rather unfriendly if they got wet, which could end up in pretty impressive explosions. The compounds of these elements, however, are very common in everyday life and can be found abundantly around our homes and within our bodies. In this demonstration, the properties of the groups 1 and 2 elements and their compounds will be demonstrated, featuring some of the famously reactive metals, such as Rubidium and Caesium!

There are so many interesting elements among the transition metals that two lectures will be devoted to their stories. In this first lecture, our attention will focus on the first row of the transition metals (Scandium to Zinc), and some of the most well-known metals are among these ten, such as iron and copper. These metals can display very beautiful and vibrant colours in their compounds and they will surprise us by their chemical reactions! We shall explore some daily life uses of these metals as well.

In this second lecture on the Transition Metals, we will focus our attention to the second and third row transition metals. Here we find some of the most expensive metals such as Gold and Platinum; some of the rarest metals such as Iridium and Osmium and some of the most elusive metals such as Mercury! In this demonstration, we will perform chemistry experiments with these expensive noble metals, these experiments are seldom performed – well, because not many are willing to give away their gold for Chemistry! Join us and be surprised by the properties of these heavier transition metals!

The common feature among groups 13 to 15 is that going from top to bottom, they switch from non-metals into semi-metals and into metals. As such, we can find rather diverse behaviours among these elements. How can carbon appear as sparkly and attractive diamonds, while the next element up, nitrogen, passes by only as a common gas that is in the air surrounding us? This demonstration will explore the chemical properties of these elements.

In the last three columns of the periodic table, are some of the elements with strongest personal characters. For example, the group 18 elements are noted for their nobility and inertness, while the halogens in group 17 are some of the most reactive and dangerous non-metal elements. While oxygen is breathed by all to survive, you may wish to stay away from the other oxygen group elements as they could bring about unpleasant effects to your body. Learn all about them at this demonstration!

Surely you have all seen a balloon. Can you make it float in the air?

When you look at yourself in a mirror, you will see an image of yourself. Will you see two images of yourself when using two mirrors? Let's use mirrors to try the trick of "Imagessss"!

Interested in making an eco-friendly "racing car" that can run without batteries? Is it possible by simply using toilet paper tubes? Let's "Rub and Roll" with your family members!

Can we turn our home into a laboratory? Indeed, there are many ‘chemicals' at home. Some of them can form unexpected chemical reactions when mixed together. Here, we use baking soda and vinegar to do a neutralisation reaction. What do you think will happen? Let's find out!

Secrets of a Lemon

We all know that lemon is sour. How can we tell if a substance is acidic or alkaline besides using our sense of taste? What are the uses of lemon? Let's explore the "Secrets of a Lemon"!

The game is about to start, let's welcome the contestants with a big round of applause!

Contestant No.1 accelerates fast at the beginning and performs a Thomas flair perfectly. It slows down in the midway, is it burnt out? Look carefully, it is going up a slope. Some kinetic energy is converted to potential energy in this process, therefore the speed drops. According to the law of conservation of energy, energy can change from one form to another, but not be created or destroyed.

In the first episode of Exploring Science 101, "Energy Machine Marathon", Bertha Yeung, curator of the Hong Kong Science Museum, will introduce to us some physics concepts behind the iconic Energy Machine.

Episode 2 – The Fourth State of Matter

Episode 2 – The Fourth State of Matter

Have you ever waited for aurora light when travelling? Today we will share with you the theory of its formation.

Apart from solid, liquid and gas, there is a mysterious fourth state of matter – plasma. When plasma returns to stable from an active state, energy is released and lights are emitted in the process. This is the science behind everyday objects like compact fluorescent light bulbs and neon lights, as well as natural phenomena such as lightning and auroras.

In this episode, "The Fourth State of Matter", Kenus Yan, curator of the Hong Kong Science Museum, will tell us what exactly plasma is by looking at some basic principles and applications.

We cannot prove the existence of a mysterious force field which can control the moving path of storms, but scientists tell us that there is indeed a force that affects the formation of tropical cyclone – Coriolis force.

With Coriolis force in play, tropical cyclones usually form over the regions between 5 to 20 degrees of latitude as the Earth rotates faster at the Equator than at the North and South Poles. Also because of this effect, tropical cyclones formed in the Northern and Southern Hemisphere rotate in opposite directions.

In this episode, "Tropical Cyclone & Coriolis Force", Timothy Ho, curator of the Hong Kong Science Museum, will tell us the science behind the formation of tropical cyclone.

Did you know what makes a great animation? Unbeatable visuals and creativity? Yes, but most importantly, it needs to come with souls.

The word "animation" comes from the Latin word "anima", which means "soul". The verb "animate" has the meaning of "endowing life". For the characters to be believable, they all have to go through different departments of "3D Animation Production House" and meet the modelers, surfacing artists and riggers!

In this episode, "3D Animation Production", Lam Hon-Kwong, designer of the Hong Kong Science Museum, will explain to us how artists and scientists work together to make characters come to life. Welcome to "The Science Behind Pixar" exhibition to find out the work of animators if you want to know more!

Bringing the characters to life is the true essence of an animator's job. But how?

Animators are like the behind-the-scenes actors and actresses who immerse themselves into the characters, and make them pose and act using programming languages. Then they will be sent to the lighting artists and the rendering team for some final polishing before meeting us!

In this episode, "3D Animation Production House Part 2", Leung Yat-Fai, technical officer of the Hong Kong Science Museum, will show us the last 3 stages of producing a 3D animation. Watch this if you want to know how animation comes to life from paper to the big screen.